AIU which is responsible for issuing equivalence to foreign qualification just doesn’t get the concept of “pathways” and seems to be deeming students who began their degrees using a pathway diploma to be un-eligible for undertaking Masters study in India. This is sheer ridiculous or should I say reckless or should I say irresponsible or should I say negligent on part of AIU. AIU is under a scanner currently but that is another story (see link).

A growing number of higher education institutions around the world are making use of academic preparatory programs, typically for students that lack the necessary training or language skills to meet given program entry requirements. The use of these programs has become especially prevalent in today’s world of internationalization and cross-border academic mobility.

The Inter University Board (IUB) was established in 1925 and was renamed as the ASSOCIATION OF INDIAN UNIVERSITIES (AIU) in 1973. The need of an organization in India for equivalence of degrees between the universities in India and abroad was felt since long, after the establishment of three premier Universities (Bombay, Calcutta and Madras in 1857) and therefore, the Inter University Board was formed as an Autonomous Body.

AIU is the only recognized body in India for granting academic equivalence of degrees/diplomas not only within the country but also to other similar bodies in foreign countries. In acknowledgement to the works done by the Division since its inception the Ministry of Human Resource Development notified that the equivalence done by AIU will be valid for the purpose of higher education as well as employment in the country.

Not only to the Universities, AIU also provides its services, for equivalence of degrees to various Central & State Employment agencies viz. Union Public Service Commission, New Delhi and State Recruitment Boards .The Division, besides Ministry of Human Resource Development, GOI, also facilitates to other Federal Ministries of India, to formulate the proposals on mutual recognition of degrees under Educational Exchange Programmes.

International students undertaking these programs – known variously as bridge, pathway or foundation – are looking to improve their language skills to a level appropriate for higher academic study, as defined by a particular threshold on a standardized foreign-language test. Additionally, international foundation programs are designed to help students meet minimum academic requirements for entry to an undergraduate or graduate degree program, while also preparing them culturally for life and study in a new study environment.

The flow chart below helps to explain how the pathways help student to progress into the degrees. 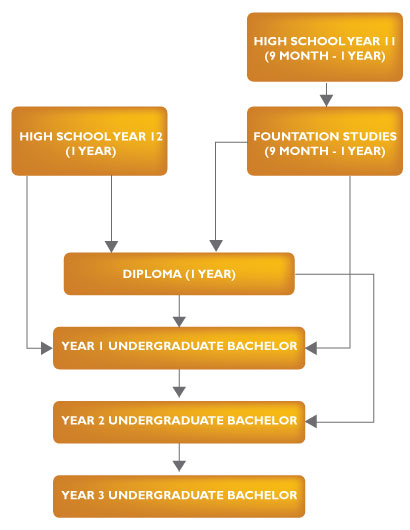 Who runs the pathway diplomas?

The diplomas are often run by another division of the same University or can be run by some specialised providers who focus on running such pathways around the world. Some of the prominent “International” diplomas to degree pathway providers are:

Navitas is an Australian company that delivers pathway programs in collaboration with 30 colleges worldwide in seven countries, including all five of the major English-language destinations. It introduced its first pathway program for Edith Cowan University in 1994 but since then has offerings in almost every education destination.

INTO University Partnerships is a British company that was established in 2005, developing its first comprehensive center with the University of East Anglia (UEA) that year and thereafter the company has expanded its partnerships rapidly in the UK, now working with 17 universities, in addition to internationally in North America and China.

Kaplan Inc, a New York-based company, is familiar to most in the United States for its history of offering test-preparation services; however, in recent years it has expanded aggressively into the university sector, both domestically and internationally.

Study Group was founded in the UK in 1994 (since sold (and resold) to Australian private equity firms). Beyond the UK, Study Group has been expanding aggressively, with some 100 centers across the globe, in Australia, Canada, Ireland, the Netherlands, New Zealand, and the United States.

What is the reason for AIU not recognising the degrees that have been built upon a pathway?

AIU clearly has not moved with times. They want the student to have spent a certain number of years for a certain degree at “one” institution. Hence if a student is seeking an equivalence for a Bachelor degree that should take three years, they expect that all the three years should be from that one institution. With pathway, often the first year is delivered by the pathway provider and hence the length of study at the University reduces. AIU’s logic needs to be challenged since the finally graduating student has a valid degree and of a very high level. It is in no way inferior to the degree that a student gets otherwise. In some ways, the students completing the degree after the pathway are better prepared in reality.

What is the impact of the non-recognition of pathways?

Students who return to India need to prove that they have a recognised Bachelor degree for the purpose of undertaking a further study in India (say a Masters) or when a student is apply for a job with the government or public sector or when the student needs to provide evidence that he/she has a Bachelors to be eligible for certain types of businesses. This is when they apply for an equivalence certificate from AIU for their foreign qualification and this is when the “shock” is experienced.

What are the Foreign Universities and Governments of destination countries doing?

I am unsure as to what UK or US or Canada is doing in this regard or even if they have come to be aware of the problem that has developed at the end of AIU. However I am told that under the Australia India Education Council, Australian and Indian Governments have formed a Qualification Recognition Task-force and included amongst the issues to be discussed is the issue of “pathway and twinning arrangements”. A copy of the agenda items under discussion of the taskforce can be found on this link

It will be ideal for UK, US, Canada, NZ and Australia to pool their resources together on this issue and pressurize the Indian Government to quickly address this in the interest of thousands of students who complete a diploma-to-degree packaging. It is taking too long for the AIU to understand a simple qualification framework and the way some of the best Universities in the world operate. I also believe that if UK and US Governments prioritise this issue, a solution can be found. A few years ago, I wrote and highlighted the issue of UK’s one year Master degrees being not recognised by AIU. That blog led to media reports which accelerated the discussions. UK PM during his visit to India listed that in his top agenda items. Today we have an announcement of a kind of bridging program that can help some of the affected students. Regarding the issue of pathways too, the prioritisation has to happen from the top. It is unfair to promote such programmes otherwise in India if they will lead to a qualification that will be deemed “unrecognised” in India.

The definition for “pathways” and listing of the named pathway providers has been taken from the article “An Evaluation of Britain’s University Pathway Programs“.