The higher education supplements around the world are reporting the Inside India report of British Council. The basic statistics quoted in the report is incorrect and so the summaries reported are incorrect too… And British Council would want you to buy that report.

Before I come to why I am saying that the report uses bad data, lets see how it has been lapped up around the world this day.

The report ‘Inside India – A new status quo’ says demand from Indian students for British universities dropped by 23 per cent between 2012-13 and by 4 per cent in the US.

However, demand for Australian places increased by 36 per cent during the same period despite Australia being the destination with the highest living costs.

“The recent increase in students studying in Australia has happened when the currency valuation makes living costs very expensive. However, work opportunities seem to have mitigated the effect of high costs of living and the negative sentiment created in 2009-10,” the report says.

Inside Higher Ed reports from US in A NEW STATUS QUO ?

While the U.K. and U.S. are the top two destinations of choice, students are increasingly applying to universities in Canada and Germany, where they perceive education to be cheaper and employment opportunities to be robust. Canada stands out in terms of perceived opportunities for permanent migration, while students see Germany as offering world-class opportunities in the automotive, engineering, and manufacturing industries. The number of Indian students in Australia, meanwhile, appears to be rebounding after a precipitous fall following a series of violent attacks on Indian students in 2009.

Now let me show the bad data used in the report…

The report quotes the following data for its analysis and for the comments made by the above articles:

THIS IS WHERE IS AM GOING TO YELL: LOL…

I can understand journalists falling for it but not British Council. And then they want you to pay for this report using incorrect data.

Further a calculation based on enrolments have been found to be faulty. The duration of programs vary and it is known that a student in US tends to remain a student for a longer period of time. In UK, Masters are for only 1 year and so the Masters students in UK do not get counted for multiple years as in other places. When there is a sharp fall in student numbers, enrolment statistics can hide the fall and give a wrong impression. And wrong strategy and wrong impressions. Sometimes the use of enrolment statistics are with an intent to put a spin to falling student interest for a destination.

If you want to have the actual student trends INSIDE INDIA, you simply have to google and you will find the following… 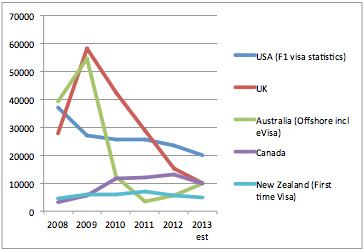 It featured in my blog on 26th of May itself…

However, the other conclusion that the the earlier projection of unabated growth from India was wrong seems to have been inspired by what I wrote too in my blog where I demonstrated that the total number of students going overseas from India to the big five destinations is actually declining and not increasing… 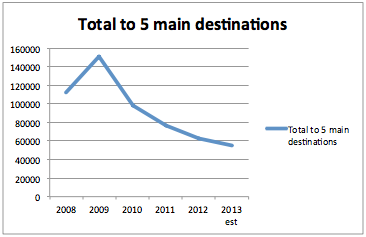 For this conclusion, my free blog would take you to the same as the priced British Council report. The reasons for this declining interest can also be found on the links on those said blogs and they are possibly more comprehensive.

British Council, you have disappointed with the kind of research that has been put in… Can expect others to make this error… not you… Please do not compare apples with oranges…