Rankings (even subject-wise) are extremely unreliable and other than location, there are hardly any differentiators. Though I am talking more of the Aussie and UK institutions and primarily those who have taken birth in the last 20 years, the same applies also to several US Universities where the choice is often made on the basis of which gives more financial aid and not on other strengths of the institutions.

Should I study at

These are only examples of the questions that students are posing on social network (read FB) groups and you will be surprised with the answers and comments. The answers and the reasons are all so “out of place” and often “incorrect advise”. Let me share one cut-paste of the exact discussions happening online that bothered me for the inaccuracies… 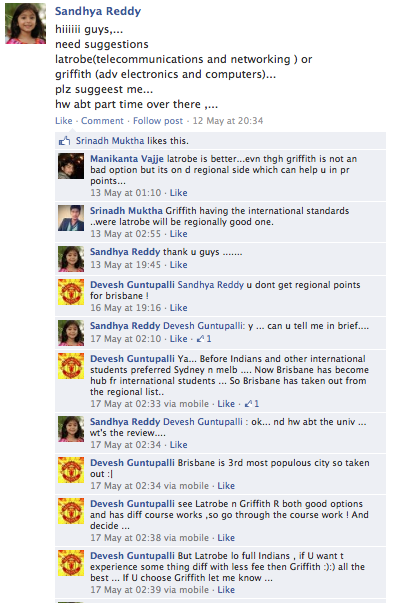 And in another post where someone wanted advise between CQU Melbourne and CSU Melbourne? Both are campuses of regional Universities located in another state and run limited programs only. While one comment indicates this for CSU, he fails to say the same for CQU… Actually as the last comment indicate, there is hardly anything to separate the too in terms of brand or real perception. 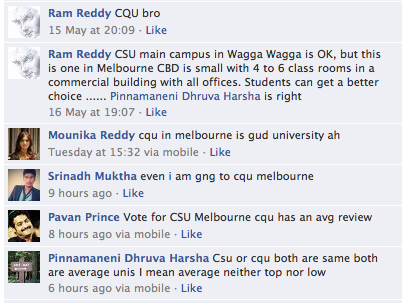 And you will notice the biases in all the communications… Why? Simply because there are NO differentiators and this is such a sad thing. On the other hand, it is easier to choose Universities in India. Have you heard of a student confused between joining Delhi University and JNU and posting such discussions online. They know it. I knew it. Even when both offer “Economics” and are good for the same, the choices are quite clear based on what we want in life and the nature of the economics that I want to study. Similarly the choice between engineering colleges. Students who are able to choose, tend to choose one IIT campus over another based on its focus on certain specialisation. Students choose XLRI over IIMs if they want to study HR even when overall ratings for IIMs is higher and have no qualm to travel to Jamshedpur or in the case of IITs to Kharagpur for the education.

The future of majority of the Universities in terms of them being provider of quality education depends on clear differentiations. A student should be able to choose one over the other for the “right reasons”. At this time most of them look like estranged twins… The websites have the same look and often designed by the same people, I know for sure that most have their brochures designed and printed at the same places and so look the same too. So what can the students rely on… the Web and Brochures look alike and the word of mouth discussions on the internet are all skewed.

There are a lot of discussions on MOOC (Massive Open Online Courses) being the only way out for the Universities of future. I believe that we need to return to differentiated institutions where each have their own USP and Competitive Advantages. MOOC may actually kill the Universities and the brand advantage of one over the other. There is a space for Universities that do predominantly open or distance education but thats it. To develop the differentiations, one needs University Leaders who have a clear vision and is supported by all involved. There will be some short term losses but then only these institutions will survive. We don’t need all to run the very same courses too. Why should the Group of 8 or the Russell Group run “conversion type courses” in say Professional Accounting or Nursing… Leave it for the others while they should focus on the purer academic teaching and research. At this time, “Jack of all trades and Master of none” applies to several institutions around the world.

One thought: Contrary to the Australian and UK models, NZ has fewer Universities and added only one in last two decades. Now if a student wants to study a stream, he does know which to choose: Food Tech or Agriculture or related for example is possibly better at Massey at Palmerston North Campus or at Lincoln in Canterbury. There is some differentiation for sure as not all run all the same programs.