On 17th April, I did a blog on India “not recognizing” UK Master Degrees that are of 1 year duration and it shocked some and disappointed some others. My colleagues in trade even felt that I was harming the business by bringing this issue out in open and some felt that the open speak will harm my relationship with British authorities. However, I am so glad that I did write that blog. Since 2009, the AIU criterion had indicated that any Masters of less than 2 years duration will not get equivalence to a Masters in India for employment or further education purposes. Yes, for private sector, they may not care two hoots for the AIU equivalence but then an added repercussion of the invalidity of 1 year Masters from overseas is that even the banks that give education loans for these programs are actually somewhere in wrong. In-fact, even the precious foreign exchange issued for such a program even if at a top University overseas is possibly beyond the guidelines of the regulations since the program of study overseas is not recognized in India for “employment and further education”. While my blog focussed on UK’s 1 year Masters since UK has been promoting the USP of its Masters as its duration being half of what US or Australia offers, the AIU guidelines also apply to Masters degrees done from other countries too where the program of study is fast-tracked to complete in less than 2 academic years. This would mean that the several of the Masters degrees from New Zealand, several from Europe and also some Masters offered in US and Australia too will be not valid as per the AIU current guidelines.

The entire purpose of the blog was to ensure that all minds are applied on this issue that is disadvantaging several students who have returned to India after the completion of the program. It was and is my aim to ensure that sooner than later Ministry of HRD and Association of Indian Universities give out clarified versions of equivalence charts and bring it in line with what is internationally acceptable. If India has no issues in giving education loans and forex for studies at world ranked Universities then it must also recognize the qualification awarded by them for employment and further education back in India.

The April blog has prompted the following addition reporting that will provide several other perspectives and in many ways complete the blog itself. And in more ways than one, it will ensure a sooner than later resolution of the matter. If that happens, I would have succeeded in my goal with the blog.

There were several pointed comments on the blog itself and Ms Suchita Gokarn, Head (Education Promotion) of British Council added…

The UK and India governments have formed a taskforce to address the issue so mutual recognition of qualifications and the UK is now undertaking an exercise to map its qualifications against those offered in India. Kapil Sibal has stated that he would like to see this issue addressed by the academic year 2013. The British Council is part of this taskforce and we will continue to work with all the necessary authorities to resolve this issue so as to support the mobility of all students.

This reply does restore some faith back in the role of British Council and slightly in a different tone to what they advised the student when they simply replied that British Council is a source of information on education in UK and has no role with equivalence in India.

On 1st May, THE HINDU put out UK PG DEGREE NOT RECOGNISED IN INDIA . This was the first major reporting inspired by the blog and it uses the same example and  also quotes me…

Ravi Lochan Singh, Managing Director of Global Reach, a prominent education consultancy, says thousands of students who go to UK are now worried. He says “AIU needs to be presented with facts so that it can change its equivalence system and accords exception to the one year Masters from UK.”At the same time, he says British Council needs to lobby for recognition of British Masters degrees of one year duration before it begins claiming the British Degrees are globally recognised.

“The least they can do if they fail to do justice to students is to promote their Masters with a clear statutory disclaimer that their degrees are not eligible for further education in India.”

In response to ongoing issues related to the recognition of UK qualifications in India, a taskforce for the mutual recognition of qualifications has been constituted under the UK-India Education and Research Initiative (UKIERI). The taskforce is endorsed by David Willetts, UK Minister for Universities and Science, and Kapil Sibal, Indian Minister for Human Resource Development, who have committed the UK and Indian governments to support the recommendations of the taskforce.

She also called on institutions to put in submissions. Clearly momentum had once again started to have this issue resolved. What bothers me that the AIU guidelines have been in place for over 3 years and only now in 2012 we are beginning to take some measures. It clearly is disadvantaging UK more than any other country and UK is possibly in the best position to have it resolved with their significant goodwill in India and through their local presence on the ground in the form of British Council.

Leading Education Magazine from the Outlook group, Careers360 covered the issue in their recent issue through an article by Urmila Rao titled UK MASTERS NOT RECOGNISED IN INDIA. Her article tries to take perspectives of some other affected students too and also questions the role of education agents who hide this fact from the students. She questions…

“Fund-starved UK colleges fish students from India, but they don’t run disclaimers about limitations of UK degree in India”

My focus through quotes in that article has been to ensure that there is sufficient lobbying and also that the students should be fully informed before they choose a 1 year Masters.

Unfortunately, most students are unaware of this fact. A one-liner mention regarding de-recognition lies buried in the AIU website. But clearly it fails to fulfil its purpose. Small wonder then, why it doesn’t occur to potential students to question the agents and university counsellors on this aspect. Collaborating Indian universities give self-disclosures a beating. The much touted education reform measures don’t highlight any action taken on this front, if taken at all. A simple initiative like an attempt for equivalence is still to be sought. “The providers and authorities have not even lobbied the case of the graduating students from UK to seek their qualification to be equal to Indian qualifications,” says Ravi Lochan.

All the above appear to be having its effect in mobilizing action. Mr Basant Mohanty wrote an major front page article on 17th July in THE TELEGRAPH titled Masters in UK, Mis-step in India and indicates that there are efforts being made to have a resolution within the 2013. The article begins with quotes of a student’s comments from my blog…

“I am absolutely shocked to hear that it is not valid in India. I joined the master’s program after resigning my job in L&T and I took a loan of almost Rs 10 lakh from State Bank to meet my education expenses. I don’t know, what I should do now by looking at the certificate I got from Liverpool,” Daniel posted on education agent Ravi Lochan Singh’s blog.

Singh, a Calcutta-based agent, said Indian students spent a lot of money doing their master’s in the UK. But if these degrees were not valid in India, the fact should have been publicised widely so that the students could have taken informed decisions.

“I have been counselling students going to leading UK institutions for years. They say the UK expects them to return to India after the course (with tighter post-study visa provisions), so they are not able to gain work experience,” he said. “However, AIU guidelines clearly say any degree (completed in) less than two years at the master’s level is not valid in India. So, the students feel unwelcome to work both in the UK and in India.”

The article also attempts at describing the UK 1 year Masters and comparing it to an Indian 2 year Masters degree. 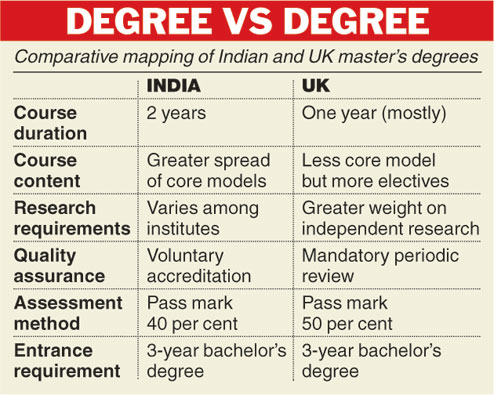 Recently a small number of Indian graduates have faced issues around the recognition of their one year UK masters degree in India for progression to PhD study. This is only an issue for certain state universities and government organisations – private universities are not affected.
The British Council has established a task force with BIS/UUK/QAA and various Indian bodies to lobby for the recognition framework to be based on recognition of learning outcomes as opposed to length of degree. It’s hoped that the UK’s one year masters will be fully recognised by the start of the 2013 academic year (and that recognition will apply retrospectively).

I am not sure if it is a disclaimer and how it is so confident that the matter will be resolved by that date and that it will be applied retrospectively. Also am not sure on the “private universities are not affected” since the AIU guidelines apply to all and in any case there are very few private Universities in India. Certainly it is privy to more than what I and you are. Or they donot know how AIU and MoHRD function in India. There are a number of statements issued by them and often they are merely statements. Remember that we are still to see the opening of the Indian education to the Foreign Providers which the Minister has been talking for years…

Guys, I do feel that the purpose has been served. A debate has started. Quality Media (The Hindu, Careers360 and The Telegraph) have taken notice. Key policy makers in UK and India have taken note BUT it is so so important to remind that while most of the UK Masters degrees are indeed for 1 years and hence affected, the 3 year Engineering degrees from UK at Bachelors level too may not get equivalent to the 4 year Indian programs. The discussions and attempts in resolution of this issue should also consider the fact that there are Master degrees around the world and not just in UK which often complete in less than 2 years and so their students are affected too by the current regulations too.

There is a need for UK to also work with Education NZ, Australian Education International, USEFI and others too in India and take this up with Ministry of HRD so that a directive is issued guiding AIU to recognize degrees from around the world and irrespective to the duration of studies. If AIU is going to insist on the duration, then well, students are better off choosing two year Masters only if they are to study overseas.