As I was driving to my place of work this morning, Green and Orange posters announcing Overseas Education Fairs of two companies (both holding it on the same day) jostled for my attention. It is not the posters per se that is causing me to pen my thoughts but certainly it reminded me of the era when I also put up posters for my computer institutes. Two years ago, we would have all frowned on such posters being put up on the streets and would possibly have thought of it is crass commercialization. I am guilty of putting these posters up too. Times have changed and we have changed with time. Albeit lowering our own set parameters of standards. There was a time when we did not advertise in the classified columns of the newspapers in our industry but today that seems to be the most sought after spot.

What I was reminded of was the phase through mid-nineties when similar promotions were carried out by computer training institutes. In those days, I had franchises of a national brand in multiple locations and the computer training industry was the industry to watch. Brands such as NIIT, APTECH and BRILLIANTS commanded huge franchise fees and were the attractive business propositions for people such as myself and my friends.

There are many parallels between the two industries.

I can go on and on listing the similarities and now that the point is made, would move on to share my fear…

Maybe I do need to be reminded that specialized and focused computer training institutes of that era have continued to survive through continuous adaptations and only the fringe ones have close shop. This is true indeed and possibly overseas education counselors will survive too with certain adaptations.

I would hope that all the like minds will meet and set some basic parameters that we all adhere to so that the quality and standards of the service are maintained. Amongst them will be issues related to the correctness of advertising. There have been adverts with agents listing over 60 institutions across several countries at an exhibition and students attending such fairs return with comments that they were surprised to see as few as 5-10 stalls and the agent pointing to a disclaimer in the advert that the ad is a general one and that not all the advertised institutions will attend the event. This is clear misrepresentation and I may say even cheating of the students and shows the agent in a poor light over his or her own standards. This blog is not about naming or giving examples but believe me, more than one agent is guilty of this conduct. I am willing to even stop putting up the street-side posters if we all can agree that it lowers the standards of the game that we play.

Talking of exhibitions, I do think that all of us give an impression that ours is the best and the biggest of the fairs. The person getting confused is the student and there is a fatigue setting in his/her mindset. And he stops attending any of the events. The same institutions get sold by all and sometimes on the same day. The days of huge turnouts in exhibitions are now over and most of us go back happy if we have 100-200 at our events. Come on guys, we can do better. We can lift our game for sure.  There are ways out. Why should we try and compete with exhibitions organized by British Councils and/or Austrade as they are not agents and hence why can we not avoid placing our dates around these two fairs. Why have deceptive adverts such as one that I saw that did not even list the name of the organizing agent and used a similar-sounding email and web-link that gave an impression of the event being organized by the Canadian government. To be honest, sometimes I can understand the zeal to get that extra business.

I guess I am now drifting from the topic of the blog and must put it to an end before I am seen to be tearing into my competitors. Honestly, I am equally guilty and want to share an artwork (from a gallery in Berlin) that was exhibited at the recently held Art Summit in Delhi where one of my company’s poster is seen prominently on the streets of Kolkata. The artist, I am informed is acclaimed Suhasini Kejriwal and the work is priced at around Euro 10000. 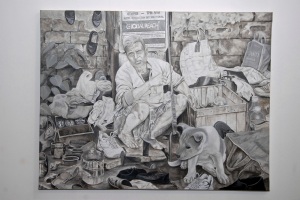 The point being made is simple: lets lift our game and lets work together to ensure that the overseas education consultants don’t end up like the computer training institutes. Let’s continue to think and develop standards that apply to all including me.