The April 16th issue of FORBES INDIA carries the theme SAVING INDIA’S HIGHER EDUCATION and focuses on the Sibal Bill. 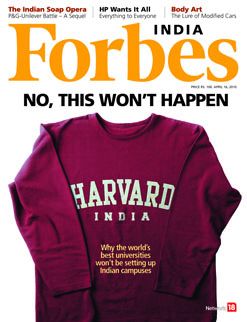 Let me quote some paragraphs from the editorial right on the first page. If you find the quotes and the matter of the article to match with the theory prescribed in my blog, I guess the FORBES article has been inspired by some of my arguments or it is a mere co-incidence.

The editorial of this prestigious International publication states:

… the challenges India faces on education seldom receives the kind of attention it deserves. And it is evident from the string of politicians who were picked to head the Union HRD ministry That’s one of the reasons why I am among the lot who cheered the appointment of Kapil Sibal as the Cabinet Minister for Human Resource Development.

…The sheer size of India’s middleclass may be alluring for P&G or Vodafone, but not necessarily for the biggest brands in the global higher education space. So expecting Stanford, Cambridge or Harvard to setup large campuses in India is simply a figment of someone’s fertile imagination. Frankly, our prognosis is that there will be no stampede of any kind. Some lesser known universities may step in and no one’s quite sure whether their quality will be up to scratch.

… While as a magazine, we are solidly behind the idea of opening up higher education to greater competition, it’s important to guard against one important myth: That these foreign universities will help solve India’s gigantic higher education challenge.

These quotes is only to whet your appetite.  Get hold of the article… and read it along with my blog of 24th March.

There is one very strong argument being provided as a solution.

…  We’ve still got time to make amends. It starts with dismantling yet another shibboleth: That education should be run only by not-for-profit trusts. Now, here’s my contention: Why not allow some of India’s leading corporations, be it the Tatas, Birlas or even Wipro, to set up for-profit institutions? Many of them are genuinely interested and the’d be a good deal better than the assortment of unscrupulous politicians and dubious entrepreneurs who have used these entry barriers to dish out poor quality education and fleece students. Under the existing model, no corporation can set aside large amounts on education without running into corporate governance issues.

Certainly, why should the Tatas, Birlas or even Wipro, not be allowed and people like Mr Chaudhury of IIPM not be checked. Careers 360 April issue provides more details on IIPM and how some states are taking action and even banning them BUT  the one who matters is going slow. I am talking of Kapil Sibal and his Ministry.