This is a bit too simplistic and let me iron out the distortions clearly. However there has to be some disclaimers. The first being that private schooling (referred in India ironically as Public schooling) is a done deal for many families and the general preference for “better” schools is completely understandable. In smaller towns with limited number of “better” schools, families “affluent or otherwise” have opted to have their children study at the “residential private schools” such as “Doon, Sanawar, Scindia or Mayo…”. The parents in North have preferred the named while those from South may have opted for Rishi Valley or Lovedale, from west may opt for Daly College and those from East may have headed for Paul’s. In earlier days, there was also a desire amongst parents to look at those whom they admired and hence chose the schooling for their children. Once “harrow educated” Nehru preferred Doon for his grand children, several parents including mine decided to register their children for admit to Doon. Similarly for the other schools. The disclaimer continues that the old-school network too helps in the way that friends help friends.
My understanding is that Amrinder Singh was brought into active politics by Rajiv Gandhi and that both of them were friends at Doon. Now we see their sons (Raninder and Rahul) in politics at the same time. Is this not understandable since friendships matter. Not just within the same political party but also across. Kamal Nath was required to knock on Naveen Patnaik to get support on the Nuclear Vote since both were class mates… Infact there is evidence that those from similar schools tend to bond with each others too as is evident from the reported friendship between Omar Abdullah and Rahul Gandhi.
However, I am of the opinion that apart from the above networking, the residential schools imbibe in boys (and girls) a belief in discipline that goes a long way. “Never Give In” has been the motto for Sanawar and to this date Sanawarians around the world take inspiration from this at the time of adversities. Omar Abdullah mentioned this too at some occasion over last year.
This aspect of a residential school is not just found in “so called” elite schools but also in any form of boarding schooling and possibly even more in Army Schools and Sainik Schools which are so common in the Hindi Heartland. At one time parents from Bihar opted to have their boys attempt entry into “Netarhat” and hence I would club all these schools into the same bracket. One of the better Hindi movies “Hip Hip Hooray” (Prakash Jha directed and featuring Dipti Naval) showed the life at Vikas Vidyalay in Ranchi which resonated so much with the lives of boys at Doon or Sanawar.
“Better” schools also focuses on the “all round” development of children and not just on academics. This includes “public speaking”, “leadership”, “brotherhood” and “independent thinking”. All these are very useful traits in politics.
Now coming to the recent Punjab elections… All three of the main players: Sukhbir Badal, Amrinder Singh and Manpreet Badal have been educated at residential boarding schools. Sukhbir at Sanawar, Manpreet at Doon and Amrinder at Sanawar and then Doon. My understanding is that their children too have studied(of Amrinder), studying (of Manpreet) or will study (of Sukhbir) at boarding schools. I would actually stretch out and say that Punjab is slightly different to other states and this is thanks to the affluence leading to families aspiring solid education for their families. The “show off” attitude too works towards it. Flashing the schooling of the children is no different to flashing an Audi or Merc ! 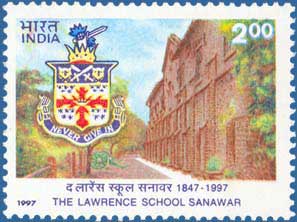 There is really no rivalry between schools as far as the politics of the land of five-rivers is considered and I am reminded of a news item from 2009 that reported the inter-play of the two schools at the time of Lok Sabha elections. The article actually indicates that both the camps have products of both the schools… interesting…

Whosoever said old school ties prove stronger than even those of blood, probably had in mind a scene akin to the one being played out in the fiercest ever poll battle being fought in Bathinda.
In this once non-descript, laidback Malwa town of Punjab, a bunch of ex-Doscos and Sanawarians have gathered in the din and dust of Lok Sabha elections to help out friends and candidates. The candidates are Raninder Singh of Congress and Harsimrat Kaur, or, to be precise, her husband, Sukhbir badal, the president of Shiromani Akali Dal.
Raninder, is a product of Doon School, Dehradun, and Sukhbir of Lawrence School, Sanawar, Himachal Pradesh. Interestingly, there are equal number of ex-Doscos and Sanawarians in both camps. And to top it all, this close-knit group frequent the same clubs in Delhi, meet frequently at parent-teacher meets in Vasant Valley School, and share tips on new farming techniques as all of them own huge farms in Punjab, Haryana or Delhi and live in palatial mansions in the Indian capital.
Raninder’s camp, primarily crowded by fellow Doscos like cousin brothers Randeep and Sarabdeep Mann, Satinder Gill and Jasdeep Nikku, also boasts of a Sanawarian, Amar Jung Sidhu, who is managing his media campaign. On the other hand, a Sanawarian like Sukhbir had made a ex-Dosco, Jaswinder Singh Bull incharge of his wife Harsimrat’s media management. Raninder enjoyed the company of another Sanawarian and a Bhutan royal, Jigme Wangdi Wangchuk, who campaigned with his friend for two days before the heat and dust of polling resulted in a heat stroke, forcing him to leave Bathinda.
Courtesy Sukhbir’s cousin, Manpreet Badal, who is also from Doon School, a number of Doscos like Paramjit Mann and Barjinder Mann who are incidentally related to the Mann cousins in Raninder camp and belong to a politician family from Karnal are hanging out in Sukhbir’s camp. Manpreet too is helping out sister-in-law Harsimrat. Among Sukhbir’s Sanawarian crowd is Jagdeep Nakai, MLA from Joga.

In fact, Raninder was the guardian of Jaswinder Bull in Doon, being one batch senior to him, and taught him how to tie turban, old-timers recall. But, even as these old boys find themselves on the opposite sides of the political camps, back in Delhi, their next generation, ie, the children of both Raninder and Sukhbir, go to the same Vasant Valley school.

The mood is best captured by Bull, who hails from a prominent landed family and is also friends with Raninder’s media campaign incharge, Amar Jung Sidhu, a landowner and progressive farmer from Patiala. “We are here to offer moral support to our friends, but we have no personal stakehere, nor are we slamming each others candidates.”

Moving on to UP now where the mother of all political battles are always fought…
The state gives the maximum number of parliamentarians and has given most of the prime ministers to the country. Hence the media focus has been on two young leaders who were determined to throw the Mayawati led government. One is Rahul Gandhi, a product of Doon School and then educated at Cambridge and Harvard and the other being Akhilesh Yadav, a product of Sainik School and then after doing Engineering in Mysore, having studied Environment Engg in Sydney in Australia.
With this setting, it is not unusual that media and commentators compared the two education routes… One shown up as elite and “away from grass roots” and the other shown up as more grounded. However all referred to both of them as “foreign educated”.
Media summarised (see link) …

It is a disservice to Akhilesh to call him foreign-educated. He has a Sainik school education – still considered in many parts of India as the most disciplined schooling that a young boy can get. He studied at the Sainik School in Dhaulpur, Rajasthan. Akhilesh then did his Bachelor of Engineering and Masters of Engineering in Civil Environment Engineering at the University of Mysore in Karnataka. Only then did he get his “foreign education” – a Masters degree in environmental engineering from the University of Sydney in Australia.

Akhilesh played his card right and only gave interviews in chaste Hindi to be able to reach each and every of his voters when there are reports that not only Hindi and English but he can actually also speak in Kannada. His foreign exposure reflected in his changing of his party’s stance vis-a-vis English and use of Computers while his disciplined schooling reflected in his strong will to instill law and order in the state. Interesting interplay of education as one would say. I would say that donot rule out Rahul. He has been working on 2014 national elections and UP was just a preparation for the same. There are polls that suggest that electorate in India votes for one party in the state and for another party in the centre based on the elections. Hence while Akhilesh’s party is a state party, Rahul is seen a possible Prime Minister from UP in 2014.
There is also another aspect of old-school tie. One is often heard whispering that media creates leaders and highlights certain… Hence the fact that NDTV(Prannoy Roy) and India Today(Aroon Poorie) are run by Doscos while there are other boarding school products that influence other channels : Karan Thapar (Doon) and Vir Sanghvi (Mayo). There are several others too…
Picture abhi baki hai dost!