This is being penned from Sydney where I have been keenly observing the dynamics of the Australian politics over the last few weeks. To me it has been so very interesting and one that I can easily relate to (coming from India). Minority Governments, a deal with Independents, last minute jigsaw and not much to decide between contending political parties is all too common in today’s India. Also like Indian political alliances between contrasting outfits, Australia too is seeing the Greens and the Labour and conservative Independents going with the Labour to form the Government.

I am often asked what can be expected from the current Government with regards to the “international education angle” in the “Indian” context and that does get one to start thinking. Is there really going to be any change? No. Not actually. Wasn’t Julia Gillard, the PM today, the education minister yesterday? Was she not the one who was the first Minister to visit India to soothe its nerves in September last year and how can she absolve herself from the gross in-action on part of the Victorian Police and also by the federal government’s non-regulation of the private colleges for such a long time.

Anyway, we all learn with time and even though I would avoid trying to read much into the words uttered by the politicians, I do believe that continuity is the best medicine at this time. There is a policy that is emerging in Australia in favour of quality education providers and in favour of the genuine migrants who bring in skills to Australia. We may have to forget the emotions and understand that at the end of the day Australia needs international education export and needs skilled immigrants. Both are linked and will remain linked in some manner. The other advantage of continuity is that the current Indian Government and new Australian Government have been talking to each other through the last one year and almost a dozen visits by Australian senior leaders reciprocated by 3-4 visits by Indian ministers has led to a level of understanding now. Kapil Sibal as India’s education minister (Minister of HRD) has hit off with Julia Gillard apparently and that is good too. With no real reshuffling expected of the bureaucrats, we can expect the joint working group continuing with its dialogue.

I am further encouraged by the fact that Greens who are now a part of the ruling coalition has been talking through the campaign for less vindictive border control and better treatment of migrants including the illegal migrants and asylum seekers. Marry this to “stop the boat” campaign of the Labour government and you are certain to get a balanced immigration policy.

At the micro level to my industry, I am expecting a fairly quick call with regards to easing of visa norms for the “university bound” students and this will be really welcome. For those who understand technicalities, I am advocating lowering of Assessment Level for India for category 573 and acceptance of Pearson’s and TOEFL in addition to IELTS. I also hope for less “anti-migrant” noises that were previously made for the domestic vote-banks, now that elections are out of the way.

I have been however desirous of observing if the Indian Media was following the Australian elections and whether it understood its relevance to India. The sad truth is that there was hardly any coverage outside of wire reports from time to time. Even on the day of the final result on this Friday, very few newspapers gave it prominence and even the internet sites of NDTV and IBN failed to even mention it. Hence pleasantly surprised I was when my hometown newspaper (The Telegraph in Calcutta) carried an editorial on the election result yesterday. While I don’t agree to the first paragraph of the article on this link where it claims that most attackers were “white Australians” (reality: attackers were of mixed race and also Indians) and most attacks ended in death (aware of only one death from the attacks and most deaths in the last few years were handiworks of other Indians), the editorial commentary on the election result including the caution that even one single by-election can bring down the government before its tenure ends, display a good understanding of the current Australian politics. Quoting from this editorial from The Telegraph (Kolkata, India) below:

So India may well hope that Mr Rudd’s successor and party colleague, Julia Gillard, who became the first female prime minister of her country, would be more proactive in making Australia a safer and more equitable place for immigrants. Such an expectation is not unwarranted. After all, Ms Gillard has cobbled together a ‘rainbow coalition’ with crucial support from one Green and three Independent members of parliament. And the Greens want the new government to focus on humane treatment of asylum-seekers and other foreigners in Australia. So this is Ms Gillard’s best chance of salvaging the global image of her country even as she tries to repair the schisms within her party.

Earlier this week, I was hosted by UNSW to pay my homage to the newly installed bust of Gandhi. The bust, I am told, was presented by the Government of India to the State Government of NSW and the state Government chose UNSW grounds as the appropriate location for its installation. 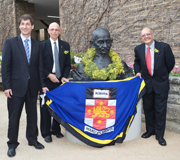 “An eye for an eye makes the whole world blind.”